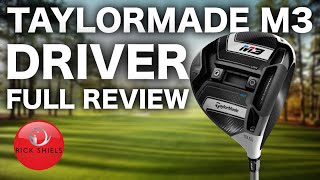 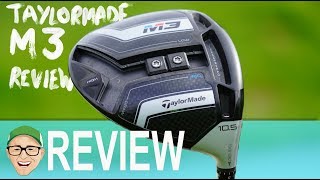 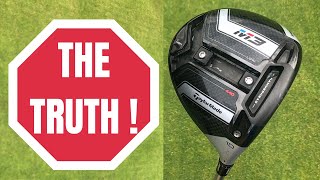 TaylorMade improves on the M1 Driver to again create the most technologically advanced driver ever – the TaylorMade M3 Driver. If you are looking for a great club that will take your drives to the next level then the M3 is the club for you. The M3 Driver is perfect for the low to mid handicap golfer looking to get the most out of their drives and improve their performance on the course.

The TaylorMade M3 Driver is one of most technologically advanced drivers ever produced and is engineered to expand the sweet spot, maximizing forgiveness, and allowing for personalized adjustment of the ball flight. It is meant to replace TaylorMade’s M1 Driver and builds on the innovations and technology that made that driver a success.

The innovative new Twist Face design uses novel corrective curvature on the face of the club to add forgiveness and help drives go straighter. The Hammerhead slot further adds to the forgiveness while also increasing ball speed to help extend drives further down the fairway. Lastly, a new Y-Track movable weight system allows adjustments to optimize ball flight. These all combine to help get the most out of drives, making them straighter and longer than before. The TaylorMade M3 Driver is truly an amazing club that is perfect for the low to mid handicap golfer looking to improve their performance on the course.

To understand the advancements of the new M3 Driver, let’s take a look at how the design and technology have evolved from the TaylorMade M1 Driver. First for the appearance – While the M1 had crown made of 6 layers of carbon mated with a white edge, the M3 reduces the weight using only 5 layers of carbon and switches to a slimmer silver edge. This color seems more reminiscent of the SLDR color scheme while also keeping the overall appearance similar to the M1.

The M1 also introduced a T-Track system of adjustable weights, which consisted of two separate tracks for front to back and side to side weight adjustments. The M3 now takes that a step further by fusing the two separate tracks into one Y-shaped track allowing for even more adjustment and customization to further refine the ball flight. Moving the two 11g weights along the unified and unrestricted Y-Track will allow a golfer to compensate for those areas where he or she wants to make improvements to the ball flight, spin, and trajectory. Front to back movements adjust the trajectory and side to side can adjust the draw and fade of the ball flight. The customizations allow consistent players to get the most out of their drives to compensate for those areas where they want to optimize ball flight on drives to get the most distance and accuracy. Specifically, by unifying the tracks into one Y-shaped track, TaylorMade has lowered the center of gravity (CG) of the M3 from that of the M1. The unified tracks mean that moving the weights all the way to the back results in a 36% difference from rear movements in the M1 and a 10% higher moment of inertia (MOI), all while keeping a low CG.

The Twist Face and Hammerhead slot are new features that are not available in the M1. The Twist Face technology is a result of the tireless efforts of TaylorMade to evaluate actual human drive tendencies, rather than those of robots. What they found is that when people strike the ball off-center, they tend to strike it either high on the toe or low on the heel. The traditional bulge (curve from heel to toe) and roll (curve from top to bottom) were not adequately correcting for these errors, so TaylorMade slightly curves the high toe section, while closing the low heel section to provide more loft in the former while providing less lift in the latter while producing more consistent side spin. The result is a much more forgiving face that accounts for natural human tendencies when striking a ball off-center and contributes to straighter and longer drives.

The Hammerhead slot is also a new feature for the M3 Driver. It complements the new Twist Face technology to maximize forgiveness and ball speed. Although the M1 did not have a comparable slot, the M2 did, and now the M3 improves on that by making the slot 22% wider. The M3 version is not only longer, it also breaks it into three section providing additional strength. This allows for reduced weight and a more flexible face, which means even better ball speed across a larger area. The face is now more flexible, with decreased spin on low-face strikes that all come together for longer and straighter drives.

TaylorMade improves on the M1 Driver to again create the most technologically advanced driver ever – the TaylorMade M3 Driver. If you are looking for a great club that will take your drives to the next level then the M3 is the club for you. The M3 Driver is perfect for the low to mid handicap golfer looking to get the most out of their drives and improve their performance on the course.

TaylorMade improves on the M1 Driver to again create the most technologically advanced driver ever – the TaylorMade M3 Driver. The new M3 Driver improves on the adjustability of the M1 Driver by offering a unified and seamless Y-Track weight system with revolutionary Twist Face technology paired with a Hammerhead slot system to not only maximize the sweet spot and forgiveness of the driver but also offer almost unlimited adjustability that can be tailored to each player’s unique strengths to get the most out of every drive. All of these advancements result in longer and more accurate drives than ever before.

How Does the TaylorMade M3 Driver Compare?

The TaylorMade M1 Driver is by far one of the most technically advanced and adjustable drivers on the market today. The newest version of this amazing club was released in early 2017, and not only did it receive the highest rating of Gold in the 2017 Golf Digest Hot list, but it also became one of the most recognized clubs used on the tour. Both Jason Day and Dustin John rose to Number 1 and Number 2 in the world using the TaylorMade M1 Driver, while J.B. Holmes led the PGA Tour in driving distance using his M1. The TaylorMade M1 Driver is truly an amazing club that is perfect for the low to mid handicap golfer looking to improve their performance when on the tee box.