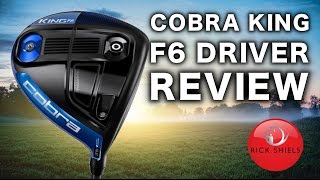 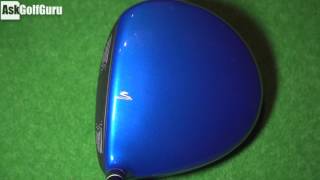 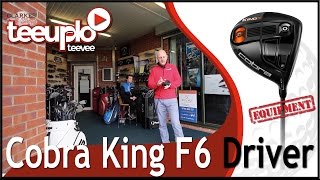 There is no doubt about it, Cobra Golf defiantly embraced their moto, “We are cool stuff that works”, with its new Cobra F6 Driver. Since it was first released in 2016, the F6 Driver has not only received the highest rating of Gold in the 2016 Golf Digest Hot list, but has also become one of the most recognized clubs used on the tour. The Cobra F6 Driver is a great mid-level priced club perfect for the high to mid handicap player looking for greater distance and consistency when hitting off the tee.

The Cobra F6 Driver also has an adjustable hosel that comes with the MyFly with Smartpad technology. This incredible technology gives players 8 easily adjustable loft settings that give players the flexibility to manage their trajectory and fine tune their launch conditions. Additionally, with an all new Forged 8-1-1 Titanium E9 Face, the Cobra F6 Driver’s variable thickness structure is now lighter and thinner than ever before. This new design helps to creates more deflection and larger sweet spot across the club face. Furthermore, the Cobra F6 Driver also has the exclusive Cobra Speed Channel. This Speed Channel is a specially engineered channel that surrounds the perimeter of the club face, this design helps to promote greater ball speed and incredible distance.

There is quite a variety of lofts you can get choose from with the Cobra F6 Driver. These lofts include the 9.0 degree, 9.5 degree, 10.5 degree, 11.5 degree, and 12 degrees. The Cobra F6 Driver also sports a 460cc titanium club head that measures out to 45.25 inches in length.

How Does the Cobra F6 Driver Compare?

Amazon.com
$299.44 1 used from $299.44
Best Deal
Last Amazon price update was: January 17, 2022 6:20 pm
× Product prices and availability are accurate as of the date/time indicated and are subject to change. Any price and availability information displayed on Amazon.com (Amazon.in, Amazon.co.uk, Amazon.de, etc) at the time of purchase will apply to the purchase of this product.

Amazon.com
$199.00
Best Deal
Price history
×
Last Amazon price update was: January 18, 2022 1:58 pm
× Product prices and availability are accurate as of the date/time indicated and are subject to change. Any price and availability information displayed on Amazon.com (Amazon.in, Amazon.co.uk, Amazon.de, etc) at the time of purchase will apply to the purchase of this product.