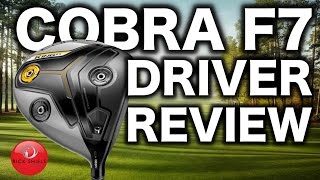 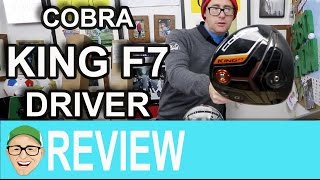 The Cobra F7 Driver is by far one of the most technically advanced and easy to hit drivers of 2017. Since it was first released in late 2016, the F7 Driver has not only received the highest rating of Gold in the 2017 Golf Digest Hot list but has also become one of the most recognized clubs used on the tour. Even Rickie Fowler has a Cobra F7 Driver in his bag. The Cobra F7 Driver is a great mid-level priced club that is perfect for the high to mid handicap player looking to swing faster, generate more ball speed, and hit longer drives when hitting off the tee.

The Cobra F7 Driver also has an adjustable hosel that comes with the MyFly with Smartpad technology. This incredible technology gives players 8 easily adjustable loft settings that give players the flexibility to manage their trajectory and fine tune their launch conditions. Additionally, with an all new Forged 8-1-1 Titanium E9 Face, the Cobra F7 Driver’s variable thickness structure is now lighter and thinner than ever before. This new design helps to creates more deflection and larger sweet spot across the club face.

The Cobra F7 Driver also incorporates the all new Cobra Connect Powered by Arccos. To be honest, this technology is nothing short of amazing and literally is the future of golf. A sensor in the grip of the club head talks to your phone app and automatically tracks your driving distance and accuracy. With the Arccos App players can get GPS access to more than 40,000 golf courses around the world to help them track their game. Cobra believes that this technology will allow players to improve their game by 3 to 5 shots on average.

The Cobra F7 Driver is paired with the lightweight Fujikura Pro 69 graphite shaft. As what has become their standard, Cobra offers a variety of flexes available for the F7 Driver, including Light (weighing 53 grams), Regular (weighing 54 grams), Stiff (weighing 56 grams), and Extra Stiff (weighing 66 grams).

The Cobra F7 Driver was one of the most successful drivers of 2017, and it is easy to see why it’s still a top choice for players today. An improvement over the Cobra F6 Driver, with its new moveable weight technology you really do have 3 drivers in one. If you are looking for a moderately priced driver that wont break the bank, that will give you the speed, distance, and forgiveness you need on the tee box, then the Cobra F7 Driver is the club for you.

How Does the Cobra F7 Driver Compare?

Amazon.com
$299.44 1 used from $299.44
Best Deal
Last Amazon price update was: January 17, 2022 6:20 pm
× Product prices and availability are accurate as of the date/time indicated and are subject to change. Any price and availability information displayed on Amazon.com (Amazon.in, Amazon.co.uk, Amazon.de, etc) at the time of purchase will apply to the purchase of this product.

Amazon.com
$199.00
Best Deal
Price history
×
Last Amazon price update was: January 17, 2022 12:52 pm
× Product prices and availability are accurate as of the date/time indicated and are subject to change. Any price and availability information displayed on Amazon.com (Amazon.in, Amazon.co.uk, Amazon.de, etc) at the time of purchase will apply to the purchase of this product.