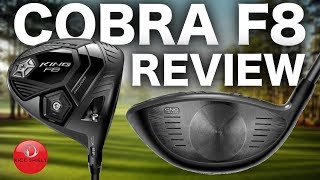 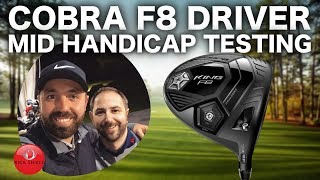 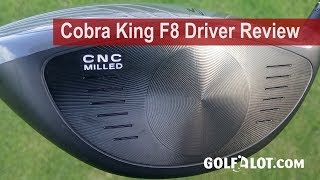 The Cobra F8 Driver is by far one of the hottest drivers of 2018. The F8 Driver features Cobra’s first ever Precision Milled Forged face that provides the ultimate in driving performance. Cobra discovered that by milling the club face it helps to prevent thickness inconsistencies and curvatures that are found when clubs are hand polished. Additionally, by milling the club face it helps to create greater accuracy and ball speeds even on mishits. This new technology paired with Cobra’s 360 Aero Technology makes the F8 Driver one of the thinnest, hottest, and most accurate drivers on the market today. The Cobra F8 Driver is perfect for the mid to high handicap golfer looking for the ultimate driver on the market that can truly improve their game.

The Cobra F8 Driver combines the very best in technology and design. The marquee of the Cobra F8 Driver is its CNC Precision Milled Face. This multi direction CNC Precision Milled Face takes about 25 minutes to complete according to Cobra, and helps to not only allow the face to be thinner but also increases ball speed and distance. This design has also allowed Cobra to create a larger sweet spot on the club, and to provide for better traction in wet conditions.

The F8 Driver also incorporates Cobra’s 360 Aero Technology. This innovative design made up of a slightly raised pattern called “Aero Trips” which are strategically located at the crown and sole of the club. The Aero Trips work by keeping airflow close to the club head thereby reducing drag during the down swing. The Aero Trips help to improve the overall aerodynamics of the club, increases club head speed, and provides for greater distance.

The Cobra F8 Driver also has an adjustable hosel that comes with the MyFly with Smartpad technology. This incredible technology gives players 8 easily adjustable loft settings that give players the flexibility to manage their trajectory and fine tune their launch conditions.

The Cobra F8 Driver incorporates Cobra Connect Powered by Arccos. Cobra initially launched is connect system in the Cobra F7 Driver and this technology is nothing short of amazing and literally is the future of golf. A sensor in the grip of the club head talks to your phone app and automatically tracks your driving distance and accuracy. With the Arccos App players can get GPS access to more than 40,000 golf courses around the world to help them track their game. Cobra believes that this technology will allow players to improve their game by 3 to 5 shots on average.

The Cobra F8 Driver comes with true aftermarket “Tour” shafts that feature premium materials and stiffer, low torque profiles that help to reduce spin and provide for improved distance and performance. The Cobra F8 Driver offers 3 different shafts as stock options including the Mitsubishi Chemical Tensei Blue (50 grams), the Aldila 2kNV Blue (60 grams), and the Aldila 2KNV Green (65 grams). There are also a variety of flexes that you can chose from, including Light, Regular, and Senior.

How Does the Cobra F8 Driver Compare?

The Cobra F7 Driver is by far one of the most technically advanced and easy to hit drivers of 2017. Since it was first released in late 2016, the F7 Driver has not only received the highest rating of Gold in the 2017 Golf Digest Hot list but has also become one of the most recognized clubs used on the tour. Even Rickie Fowler has a Cobra F7 Driver in his bag. The Cobra F7 is the perfect club for the high to mid handicap player looking to swing faster, generate more ball speed, and hit longer drives when hitting off the tee.

The Cleveland Golf Launcher HB Driver blends the incredible technology available today with the classic look and functionality of ten years ago. Golf Digest recognized the incredible features of this driver by giving it the Silver rating on its 2018 Hot List. Cleveland Golf has been a leading name in golf club manufacturing for generations, and major champions Keegan Bradley and Graeme McDowell have trusted them for years. This driver features incredible technology for as much as half the cost of some of its competitors, giving you an optimal bang for your buck. If you are a mid to high handicap player looking for a driver that doesn’t require any tinkering whatsoever, and just want to hit it long and straight off the tee, then the Cleveland Golf Launcher HB Driver is right for you.is an amazing club that is not only light weight and forgiving but has been designed to provide players with exceptional ball speeds off the tee. The XR Driver is the first club in the new XR line, which has been chosen by Callaway to replace the extremely popular X2 Hot. Combining cutting edge technology, an aerodynamic head, thinner face, and maximizing the shaft load, Callaway has delivered a club that will give forgiveness and distance to golfers for years to come. There is no doubt that the XR driver has exceeded all expectations, as evidence by receiving the highest rating of Gold in the 2015 Golf Digest Hot list. The Callaway XR Driver is a great mid-level priced club that is perfect for the high to mid handicap player looking to swing faster, generate more ball speed, and hit longer drives.

Amazon.com
$199.00
Best Deal
Last Amazon price update was: September 30, 2022 7:00 am
× Product prices and availability are accurate as of the date/time indicated and are subject to change. Any price and availability information displayed on Amazon.com (Amazon.in, Amazon.co.uk, Amazon.de, etc) at the time of purchase will apply to the purchase of this product.