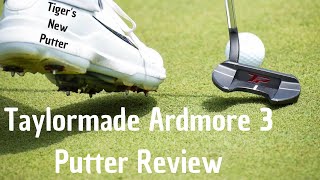 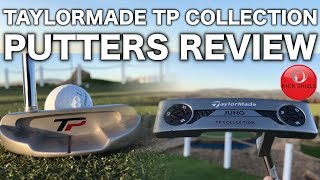 You’re losing strokes if you’re not using the best technology available. But that doesn’t mean you have to sacrifice the traditional design that has given you confidence for so many years. The Taylormade TP Ardmore collection of putters deliver the best of both worlds in this regard. If you’re looking for a putter with a bold look that embraces traditional design, the best choice is one of the TP Ardmore putters.

When Jason Day had Taylormade make him a custom putter with a red finish that contrasted sharply with the white ball he ascended to the #1 world ranking. Red is now en vogue with putter design and the Taylormade TP Ardmore line of putters continues that trend. The family features several mallet head designs that make alignment easy and afford forgiveness across the entire face. It’s no surprise the TP Ardmore family of putters received a Gold Rating on the 2018 Golf Digest Hot List. If you’re a player looking for a putter that incites confidence and provides maximum forgiveness, then the Taylormade TP Ardmore putter should be in your bag.

The modern trend in putter design is all about increasing MOI and providing maximum forgiveness. Companies across the board have achieved this with added fangs, flanges, and bars that add mass to the head and complicate the design. The TP Ardmore embodies maximum forgiveness and MOI without sacrificing the traditional mallet look preferred by most players.

Pure Roll Insert Technology is unique to Taylormade. Made of high-grade aluminum, the insert features grooves that are angled downward at 45 degrees to increase contact points at impact and get the ball rolling forward more quickly than traditional milled-face putters. The end result is putts that consistently start and stay on line.

Heel and toe weights increase stability throughout the entire stroke. By adding weight to the perimeter of the putter head, the tendency for the face to rotate is reduced and forgiveness is increased. The adjustability of the weights also allows players to optimize head weight for their individual stroke.
What draws players to the TP Ardmore the most is the bold, clean look that instills confidence. The red finish makes for a stark contrast among the golf ball, putter, and green. The absence of sheen also means you’ll never have to worry about glare on a sunny day. Two distinct site lines on the back the of the putter aid in alignment and let you know the putter is square every time you set up.

You’re losing strokes if you’re not using the best technology available. But that doesn’t mean you have to sacrifice the traditional design that has given you confidence for so many years. The Taylormade TP Ardmore collection of putters deliver the best of both worlds in this regard. If you’re looking for a putter with a bold look that embraces traditional design, the best choice is one of the TP Ardmore putters.

More than any other mallet putter on the market, the TP Ardmore collection of putters combines cutting edge technology with classic design. Having become the putter of choice for many of the best players in the world and weekend golfers, this is a putter that truly sits in a class of its own.

How Does the Taylormade TP Ardmore Putter Compare?

The TaylorMade Spider Putter Review is one of the most interesting and popular putters used on the Tourt today. Inspired by the likes of Jason Day and Dustin Johnson, Spider putters were coveted overnight by the best players in the world and weekend warriors alike. It comes as little surprise that the Spider received a Gold Rating on the 2018 Golf Digest Hot List. If you’re a player of any ability that is looking for more consistency on the greens from one of the most forgiving putters around, the Taylormade Spider is an investment you need to make.

The Seemore Nashville Putter has been one of the most popular putters used on the tour, ever since since Zach Johnson won the 2015 British Open Championship. Seemore Putters have always been on the cutting edge of technology, design and performance. Their new Nashville Studio line incorporates tried and true alignment technology with the finest materials and milling techniques to produce a putter that is sure to make players of all levels more consistent on the green. Having received a Silver Rating on the 2018 Golf Digest Hot List, the Nashville Studio line features improved design features that make it one of the most reliable putters available. If you’re a player that struggles with alignment or simply loves the feel and feedback of a milled face, there is a Seemore Nashville Studio putter for you.

The Odyssey Toe Up Putter is by far one of the most versatile putters available today. When Odyssey first introduced the Toe Up putter in 2016, no one knew anything about it until it showed up unannounced in the Odyssey merchandise booth at the PGA Merchandise Show. Meant to be a sidebar release with the White Hot Rx, the Toe Up putter was anything but. Designed with an emphasis on making the head easier to control throughout the stroke, the Top Up putter has received rave reviews. Available in two of Odyssey’s classic blade head designs (#1 and #9), the Toe Up putter is a great option for any player looking to reduce torque and strike putts more consistently.