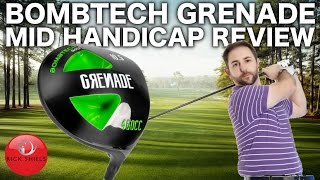 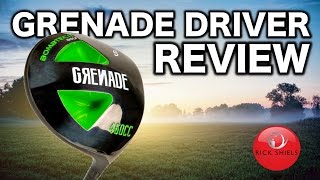 Don’t let the an unknown name scare you, the BombTech Grenade Driver is an amazing club that can easily stack up against some of the major golf club brands. If you are looking for a great club without any gadgetry that will simply get the job done, then this “game improvement driver” may be the club for you.

Amazon.com
Best Deal
Add to wishlistAdded to wishlistRemoved from wishlist 0
Last updated on September 25, 2022 6:00 am

The BombTech Grenade Driver is one the most powerful drivers on the market today that is made by a company that you may have never of before.  So who is BombTech? BombTech Golf is one of a small group of independent golf manufacturers making a splash in the golf industry by directly competing with the major golf brands. As you know golf professionals are paid millions of dollars a year to use the golf clubs of the major brands. This cost is then later passed onto the consumer when we purchase these clubs.

BombTech bucks this trend by providing high-performance golf clubs for almost half of the price by selling directly to consumers.  By not spending money on marketing or sponsorship BombTech is able to sell a high-quality club for a fraction of the price. So, the real question is can a golf produced by a small independent golf manufacturer really compete with the major golf club brands? Let’s find out.

The BombTech Grenade Driver has been designed to give a player the two things most desired in a driver: high launch and low spin. If a golfer is able to maximize these things, then they will be sure to find themselves having greater distance off of the tee. This breakthrough is accomplished by the optimization of the center of gravity by use of an external weight.  Additionally, the G20’s large multi-thickness face produces greater ball speed and an increase in MOI allowing for greater forgiveness.

The biggest question I had going into this review was what PING plugged with this driver: high launching with low spin. I usually hit the ball a bit too low and thought that my spin rate was fine. But after hitting the G20 at the driving range, I found that the ball took off much higher, and dropped ever so slightly.  My other concern was that due to the launch characteristics, I was afraid I would lose some of my accuracies. However, I realized that my concerns were unfounded, and my accuracy stayed the same as when I hit my normal driver. If I had one knock on the G20 it is that I didn’t get the normal feedback as I have with other drivers in the past.

Don’t let the an unknown name scare you, the BombTech Grenade Driver is an amazing club that can easily stack up against some of the major golf club brands. If you are looking for a great club without any gadgetry that will simply get the job done, then this “game improvement driver” may be the club for you.

As you can probably guess, I think the BombTech Grenade Driver is great. It is designed for the golfer who does not want to spend a ton of money on a driver but wants something that can hit the ball far down the fairway. If you want a name brand golf club that is adjustable then this is definitely not the club for you. There are many drivers to choose from on the market, but if you are looking for a moderately priced “game improvement” driver that will give you the power and distance you need, then the BombTech Grenade Driver is the club for you.

How Does the BombTech Grenade Driver Compare?

The all new Adams Blue Driver was made with one goal in mind, to help golfers hit the ball farther and higher when on the tee box. While there is no fancy gadgetry with the Adams Blue Driver, it does not have sole weights, sliding weights, and the hosel’s are not adjustable, it is packed with other designs that can help a golfer get more height and distance from the club. With a 460cc titanium head and a center of gravity position that is low and towards the back, the Adams Blue Driver is designed to encourage a higher initial launch angle which is greater than many other conventional drivers on the market today. The Adams Blue Driver is an amazing club that will make those long par 5’s just a little bit shorter and easier to make A beautifully crafted club that is very aesthetically pleasing, the Adams Blue Driver is perfect for the mid to high handicap golfer looking to improve their game.

Amazon.com
$199.00
Best Deal
Last Amazon price update was: September 24, 2022 9:23 pm
× Product prices and availability are accurate as of the date/time indicated and are subject to change. Any price and availability information displayed on Amazon.com (Amazon.in, Amazon.co.uk, Amazon.de, etc) at the time of purchase will apply to the purchase of this product.