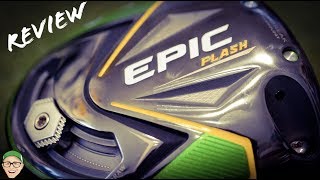 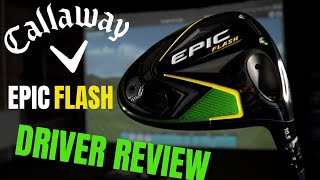 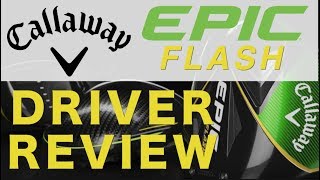 While it is true that not any one driver will fit every golfer, I think that unless you are 100% happy with your current driver you should be testing this club. Even golfers like myself that are comfortable with their current gamer should give the new Callaway Epic Flash consideration. I was not expecting to be as impressed as I was by this product. Rarely do I find something in my club testing that wows me as much as the Epic Flash did.

New for 2019 is the Callaway Epic Flash driver. Callaway has spent over 5 million dollars to produce their most technologically advanced driver yet. Building on the massive success of the Epic range of 2017, the Epic Flash is promising more speed and more forgiveness. Gaining traction in the bags of Callaway’s tour staff, the Epic Flash is already a proven winner.

Epic Flash finished in first place at the Sentry Tournament of Champions in Kapalua in the bag of Xander Schauffele. This club is made for golfers of all skill levels looking to improve their ball speeds and get premium performance from the tee box. This is definetly one of the best callaway drivers ever made, and will be one of the best golf drivers of the year.

Golfers have come to expect Callaway to create drivers and metal woods that look and feel great. The Epic Flash is no different. The new carbon crown weave and curved alignment aid helps golfers ensure that their driver’s face is sitting perfectly square behind the golf ball. The standard Epic Flash provides a confidence inspiring look in a package that even better players will love.

The new Flash Face is molded with ridges and valleys that help golfers maintain their optimal ball speeds across the club face. Jailbreak has been a part of the last two product release cycles and it is continued in the Epic Flash. Jailbreak revolutionized speed when it was introduced in the original Epic drivers in 2017 and this improved mold helps golfers get maximum speed when they strike the golf ball low and high in the club face.

During my fitting, I was most impressed with the exceptional ball speeds and forgiveness of this driver. My typical miss with the driver is low in the club face. Jailbreak has always impressed me with its’ ability to maintain my ball speeds when I don’t hit the driver perfectly in the middle. The Epic Flash is my favorite driver from Callaway that I have ever hit. It is the only driver that I have had in my hands that has given me pause to replace my current gamer. I was so impressed in fact, that I will be getting the Flash for my on-course testing to see if it can replace my G400 Max. If not for my comfort and familiarity with my G400, there is no doubt the Epic Flash would be going in my bag for this season.

I was fit into this club in the new Graphite Design Tour AD IZ shaft at 70 grams in the X-stiff version. This combination of driver and shaft is the best feeling driver I have ever hit. I even produced my longest driver ever on a simulator with a carry of 318 yards for a total distance of 342 yards. There is no doubt that the Epic Flash will be a flagship driver for 2019 and if you are in the market for a new weapon off the tee you should be testing Callaway’s new offering.

While it is true that not any one driver will fit every golfer, I think that unless you are 100% happy with your current driver you should be testing this club. Even golfers like myself that are comfortable with their current gamer should give the new Callaway Epic Flash consideration. I was not expecting to be as impressed as I was by this product. Rarely do I find something in my club testing that wows me as much as the Epic Flash did.

The Callaway Epic Flash driver is available in two models. The standard Epic is built with weight pulled further back and offers golfers slightly higher spin and more forgiveness. The Epic Flash Sub-Zero pushes more weight forward to drop spin for the player who needs less backspin from the tee.

Stock shafts of this club are the Project X EvenFlow Green 55g, Project X HZRDUS Black Smoke 60g, and70g, and the Mitsubishi Chemical Tensei AV Blue 65g and 75g options. Golf Pride’s New Decade Align grips comes in a custom green Epic colorway. The stock length of these drivers is 45.5 inches. These drivers are both available in over 100 custom order configurations and can be fit at all your local pro shops and retail stores.

The Epic Flash family of drivers is without a doubt the best driver offering Callaway has ever produced. Players coming from Epic will notice ball speed increases and better forgiveness. Improved sound and feel from the Flash Face makes the Epic Flash a pleasure to hit. I believe this club will be the stand out driver in this year’s market and I would encourage all of our readers to go give it a try as soon as possible. Golfers can dial in their misses with the sliding track weight making the Epic Flash uniquely suited for almost all kinds of golfers. Players needing extra distance from their driver will benefit from the extra ball speed and precise fitting available in the new Epic Flash.

How Does the Epic Flash Driver Compare?

The Callaway Epic Driver was Callaway’s first driver that incorporated Jailbreak technology. A revolutionary driver at the time, the Epic driver made Callaway the #1 driver in golf. Faster ball speeds and improved forgiveness resulting from the Jailbreak bars that connect the top and bottom of the driver lead to better performance and a new standard for equipment manufacturers. The Epic driver is still a top contender in local golf shops.

Fairway Golf, Inc.
$299.99
Best Deal
Last Amazon price update was: August 6, 2022 10:01 am
× Product prices and availability are accurate as of the date/time indicated and are subject to change. Any price and availability information displayed on Amazon.com (Amazon.in, Amazon.co.uk, Amazon.de, etc) at the time of purchase will apply to the purchase of this product.

Callaway builds on the smashing success of the GBB Epic to create an even better driver – the new Rogue Driver. The Rogue was a departure from Callaway’s traditional model in speed. By redesigning Jailbreak and increasing MOI, Callaway built Rogue to be a forgiving complement to the original Epic. Rogue featured an hourglass shape in the bars that connected the two halves of the club head and gave Callaway more weight to move backward in the club head. The result was ball speeds that rivaled the original Epic with more forgiveness. Epic Flash builds on both Epic and Rogue to give golfers the best in innovation and performance.