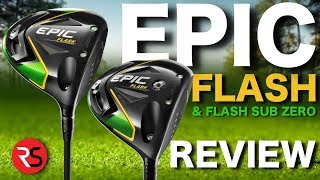 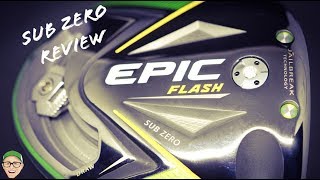 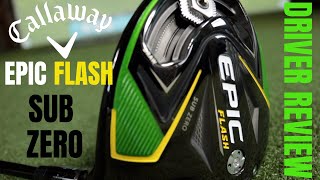 Golfers looking to lower their spin rates with the driver should be testing the Epic Flash Sub-Zero. While it is not built for every swing, this driver is long. Unless you are completely satisfied with the current performance of your driver you should be testing this new line from Callaway. This club was great in my hands and I am confident that it will perform equally as impressively in yours. Find the Callaway Epic Flash Sub-Zero in retail store and pro shops right now to get fit for your game.

Callaway is confident they have created the best low-spin driver of all time. Brand new for the 2019 season is the Callaway Epic Flash Sub-Zero driver. Callaway used machine learning and artificial intelligence to create the fastest face in golf. The new Flash Face offers increased ball speeds and more forgiveness. Jailbreak is maintained and is improved in the Flash driver.

Epic Flash Sub-Zero is built for players who need less spin from their drivers. High swing speed players and players who fight a high spinning slice will benefit from the technology Callaway has packed into this forgiving package. The Callaway Epic Flash Sub Zero is by far one of the best golf drivers of the year.

Elite players and high handicap golfers often struggle from tee shots that have too much backspin. If this sounds like you the Sub-Zero offering in the Epic Flash range will lead to longer drivers and shorter approach shots into the greens. The Epic Flash Sub-Zero offers a squat profile and a center of gravity that is pushed further forward to help golfers reduce spin. A new carbon crown weave helps Callaway engineers position a weight track in the rear of the club head. This is the first Sub-Zero offering from Callaway to allow golfers to adjust their ball flights to aid slices and hook in the lower spinning option.

Due to the new weight track system in the back of this low-spin club head, I believe this to be the best low spin golf driver available right now. When the backspin is reduced in a driver, the ball flight can be less stable, and golfers need more help reducing their misses. For the better player looking to drop spin but eliminate the left miss, the Epic Flash driver is made for your game. High handicap players looking to cure their slice and drop spin have a new tool to help keep them in play and shoot lower scores.

Being a medium to a low spin player with my driver swing, I usually do not fit into the lower spin driver models. The Callaway Epic Flash fit me anyway. I was amazed at how much forgiveness was packed into such a low-spin design. In my hands, the Epic Flash Sub-Zero is the most forgiving and longest low-spin driver on the market.

In both the Epic Flash models, I was fit for the 10.5-degree head with the Optifit hosel set at -1 for a playing loft of 9.5-degrees. I have never been more pleased with the visual appearance of a Callaway club head. Epic Flash is the best-looking driver Callaway has ever produced, minus possibly the colorway on the sole of the club. For some golfers, the yellow paint fill may be distracting but vanishes when the club is in playing position. My shaft of choice in these clubs was the Graphite Design Tour AD IZ shaft at 70 grams in the X-stiff version. I believe this club is the best performing driver of 2019 that I have yet to be able to test. Outpacing offerings from TaylorMade, Titleist, and Cobra, the Callaway Epic Flash will be a top performer.

Golfers looking to lower their spin rates with the driver should be testing the Epic Flash Sub-Zero. While it is not built for every swing, this driver is long. Unless you are completely satisfied with the current performance of your driver you should be testing this new line from Callaway. This club was great in my hands and I am confident that it will perform equally as impressively in yours. Find the Callaway Epic Flash Sub-Zero in retail store and pro shops right now to get fit for your game.

The Callaway Epic Flash driver is currently offered in two different club head models. The Epic Flash Sub-Zero pushes weight forward and drops spin in a compact design. The standard Epic boasts a larger club footprint and can offer more forgiveness to the player looking for more help off the tee. The Sub-Zero head is available in lofts of 9 and 10.5 degrees while the standard Flash come in 9, 10.5, and 12 degrees of loft.

While these clubs are only available in these lofts, the Callaway Optifit Hosel gives club fitters and golfers the ability to change the loft of their driver by down -1 degree or +2 degrees giving the Epic Flash a loft range of 8 to 14 degrees total. Both clubs can also be adjusted to a draw bias setting that helps golfers eliminate their slice.

Premium shaft offerings are available with the Epic Flash driver heads. Project X’s EvenFlow Green and HZRDUS Smoke are available in 55, 60, and 70-gram weight options and come in regular, stiff, and extra-stiff flexes. The Mitsubishi Chemical Tensei AV Blue shaft is also available in 65g and 75g options. Each driver is outfitted with Golf Pride’s New Decade Align grips in a custom Epic Flash colorway. Several aftermarket shafts and grip are ready for custom order and can be built to your specs.

The engineering and artificial intelligence research that went into the Epic Flash drivers will unquestionably push the design of driver club faces forward. The 2019 model offerings from Callaway are the best they have ever produced. Players coming from almost any other driver will gain ball speeds and forgiveness. The Epic Flash’s performance has been coupled with a sound and feel that players of all abilities will love. Having already been validated by a PGA Tour win, I believe this club will be the perfect driver for players looking for less spin off the tee box. If you are a player looking for longer drives from high launch, low spin then and you should be getting fit for the FLASH!

How Does the Epic Flash Sub-Zero Driver Compare?

The Callaway Epic Flash Driver is the larger club head model for Callaway’s 2019 lineup. Fit to a wider range of golfers, the standard Epic Flash offers more forgiveness and higher spin rates than the Epic Flash Sub-Zero. For golfers that love the feel and sound of the Epic Flash Sub-Zero, but need higher spin or more forgiveness, the standard model is the perfect option. These two models together help Callaway build a driver that is fast, forgiving, and perfectly fit for every golfer and swing type.

The Callaway Epic Sub Zero was one of the longest drivers ever produced when it was released in 2017. Made for elite golfers and player struggling with spinning their drivers too much, the Sub-Zero model was massively successful for Callaway. While the Epic Sub-Zero was long, it was unforgiving for golfers not striking their drivers with incredible consistency. Callaway took what was great about Epic and packed it into the Rogue and Epic Flash models.

The Rogue Sub Zero Driver is getting a lot of excitement as the follow up tour-level driver for the hugely successful Epic Sub-Zero. Coupled the performance benefits of Jailbreak technology with improved forgiveness. By reducing the weight of the Jailbreak bars, engineers could move more weight towards the back of the club head. The result was a longer, more forgiving club with high MOI. The Rogue Sub-Zero remains an amazing driver for many golfers and will be the biggest rival to the new Epic Flash Sub-Zero

Amazon.com
$403.99
Best Deal
Price history
×
Last Amazon price update was: January 17, 2022 12:01 pm
× Product prices and availability are accurate as of the date/time indicated and are subject to change. Any price and availability information displayed on Amazon.com (Amazon.in, Amazon.co.uk, Amazon.de, etc) at the time of purchase will apply to the purchase of this product.