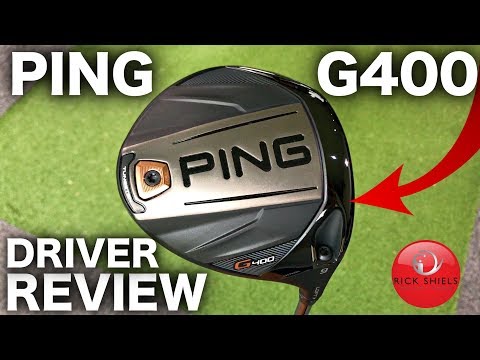 Golf is a game of misses and narrowing those misses off the tee is paramount to shooting lower scores. Building on its reputation for sound engineering and maximum forgiveness, Ping has optimized the G400 to do just that—find more fairways and improve off-center shots. If you’re a player who struggles with accuracy or solid contact off the tee, the Ping G400 needs to be in your bag.

pgatoursuperstore.com
$374.98
Best Deal
Add to wishlistAdded to wishlistRemoved from wishlist 0
Last updated on June 25, 2022 12:59 am

Ping drivers have long been known as some of the most forgiving, well-engineered on the market and the Ping G400 is certainly no exception. Having received the Gold rating on Golf Digest’s 2018 Hot List, the Ping G400 boasts several technological and design improvements from last year’s Ping G model. The G400 has been proven to provide increased forgiveness and accuracy for golfers from the PGA Tour down to rank beginners. If more fairways and forgiveness are what you’re looking for, then the Ping G400 is the driver for you.

The Ping G400 is designed for any player seeking maximum accuracy and forgiveness. Streamlined head design, a thin forged face, a customizable tungsten backweight, and a thin crown and skirt make the G400 one of the most well-built drivers available.

The head shape of the G400 is smaller (445 cc) and much more aerodynamic than the previous G driver. Incorporation of Vortec Technology and turbulators on the crown reduce drag mid-downswing by 40% and overall by 15% resulting in faster clubhead speed, ball speed, and more stability at impact.

The forged T9S+ face is one of the most flexible on the market meaning it literally bends upon contact creating a trampoline effect that increases ball speed. Because the face is forged instead of cast, it provides the player with a solid feel and more precise feedback on mishits.
Dragonfly Technology has made the top of the club incredibly thin which enables the center of gravity to be moved lower and further back in the club creating optimal conditions for high launch and low spin. The thinner crown and lower center of gravity also increase MOI.
The high-density tungsten backweight is the most forgiving feature of the G400. The weight is also interchangeable allowing players to customize their swing weight and adjust the loft one degree up or down.

Golf is a game of misses and narrowing those misses off the tee is paramount to shooting lower scores. Building on its reputation for sound engineering and maximum forgiveness, Ping has optimized the G400 to do just that—find more fairways and improve off-center shots. If you’re a player who struggles with accuracy or solid contact off the tee, the Ping G400 needs to be in your bag.

The Ping G400 comes in both left- and right-handed versions with lofts of either 9 or 10.5 degrees that can be adjusted one degree in either direction. The length is 45.75 inches and the lie angle is 59 degrees. Stock shaft options include the Ping Alta CB 55, Ping Tour 65, Ping Tour 75, Alta Distanza, Aldila X-Torsion Copper, Kurokage Silver Dual-Core TiNi, and HZRDUS Yellow.

The Ping G400 is a great club for any player that is seeking greater accuracy and forgiveness. With a new streamlined head shape, forged face, low center of gravity, and adjustable back weight, players of all abilities can benefit from the G400’s performance features.

How Does the Ping G400 Driver Compare?

Callaway builds on the smashing success of the GBB Epic to create an even better driver – the new Rogue Driver. The Rogue uses an improved Jailbreak technology with carefully engineered X-Face VFT to increase ball speed and forgiveness. Callaway also aerodynamically designed the Rogue driver to improve head speeds by optimizing the air flow and reducing drag. The result is a driver that avoids a complete redesign of the highly acclaimed GBB Epic, and instead improves upon what made that driver so good. The Rogue is an excellent choice for any golfer, but mid to high handicap golfers will find the most benefit with increased forgiveness and ball speeds.

Amazon.com
$299.44 1 used from $299.44
Best Deal
Last Amazon price update was: June 25, 2022 4:59 am
× Product prices and availability are accurate as of the date/time indicated and are subject to change. Any price and availability information displayed on Amazon.com (Amazon.in, Amazon.co.uk, Amazon.de, etc) at the time of purchase will apply to the purchase of this product.

Amazon.com
$299.99
Best Deal
Last Amazon price update was: June 25, 2022 9:43 pm
× Product prices and availability are accurate as of the date/time indicated and are subject to change. Any price and availability information displayed on Amazon.com (Amazon.in, Amazon.co.uk, Amazon.de, etc) at the time of purchase will apply to the purchase of this product.