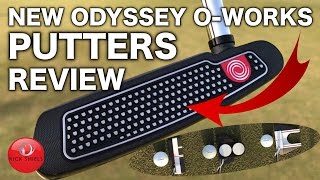 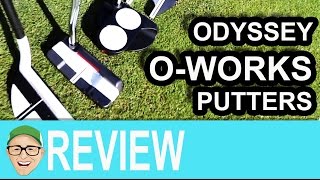 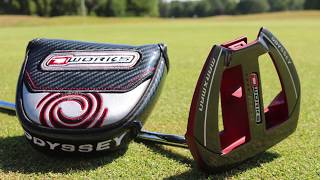 When a certain brand of club is the #1 preferred brand by the best players in the world year after year, you know there is something special about it. Odyssey is that brand when it comes to putters and its latest O-Works Black and O-Works Red line are no exception. If you’re a player that likes a clean design and consistent performance on the green, the newest line of O-Works putters might be your best choice in 2018.

Building on the success of the O-Works line released in 2017, Odyssey has released the O-Works Black line along with six new models in the O-Works Red line in 2018. O-Works putters have long been the #1 putter on tours worldwide and the newest members of the O-Works family are already proving their mettle with multiple wins around the globe.

Utilizing cutting edge technology in classic head designs that have stood the test of time, the new Black and Red models received Gold Ratings on the 2018 Golf Digest Hot List for both mallet and blade putters. If you’re a player of any skill level that has used one of Odyssey’s iconic heads in the past or is simply looking for consistent performance and feel on the greens, you need to give one of the O-Works putters a shot.

When club manufacturers get feedback from the best players in the world, they usually listen. That is precisely what Odyssey did in designing the newest O-Works Red and Black lines of putters. Designed on the consensus that Tour pros largely preferred a clean look at address, the 2018 head designs lack some of the flare characteristic of its competitors but certainly do not sacrifice anything in performance or technology.

The insert in the O-Works line is made from a stainless steel Mircohinge plate that is co-molded with a Thermoplastic Elastomer Feel Layer. The marriage of these two layers provides players with the solid feel of stainless steel and a soft responsive sensation that is optimal for distance control. Unlike solid-face putters, the insert allows weight to be more evenly distributed throughout the entire head promoting greater stability on mishits.

Microhinge Technology is scientifically proven to get putts rolling more quickly. The design features upside down L-shaped stainless steel hinges that are imbedded into the outer Thermoplastic Elastomer layer. The hinges flex at impact and create 70 rpm of over spin getting the ball hugging the ground almost immediately. To further test the theory of the Microhinge design, Odyssey inverted the hinges to face upward in a normal L shape and the results produced equal amounts of backspin.

When a certain brand of club is the #1 preferred brand by the best players in the world year after year, you know there is something special about it. Odyssey is that brand when it comes to putters and its latest O-Works Black and O-Works Red line are no exception. If you’re a player that likes a clean design and consistent performance on the green, the newest line of O-Works putters might be your best choice in 2018.

The Odyssey O-Works Black line features 12 different head designs and the O-Works Red line has six new head designs. Both lines have a variety of blade and mallet head styles with both face balance and toe hang options. Putters in both lines are available in lengths of 33, 34, 35, and 38 inches. Loft comes standard at three degrees and the lie angle is 70 degrees. Stock grip options include the Superstroke Pistol GT Tour with Counter Core Technology, Superstoke Slim 2.0 with Counter Core Grip Technology and the Superstroke Tank grip (available in tank models only). For a complete list of head designs for both the Red and Black lines, visit the manufacturers website here.

The Odyssey O-Works line of putters are some of the most well-designed putters on the market today. Built with extensive feedback from the best players in the world in mind, these putters are among the best of the best in both design and performance.

How Does the Odyssey O-Works Black and Red Line Putter Compare?

The Envroll ER7 Putter is unquestionably one of the most technologically advanced putters around. Featuring Sweet Face Technology, the head design is unlike anything else on the market and is proven to perform consistently on both solid putts and mishits. Introduced in 2017, the Envroll ER7 received a Silver Rating on the Golf Digest Hot List. The technology in the Envroll ER7 makes it one of the most forgiving putters on the market allowing players to make more putts and shoot lower scores. If you are a player looking for increased forgiveness and a more consistent roll off the face, the Envroll ER7 should be in your bag.

The Cleveland TFI 2135 Putter is one of the most beautifully crafted putters today. When Cleveland introduced the latest version of the TFI 2135 in 2017 they knew they were on to something. Still touting the cutting-edge sightline found in previous models, the latest TFI 2135 Satin line incorporates new materials and technology making it one of the most well-built and functional putters on the market. Golf Digest gave the TFI 2135 Satin line a Silver Rating on their 2017 Hot List. With five different head designs, this latest line of putters gives players a multitude of options when choosing the best putter for them. Players of all abilities can benefit from design features and technology in the TFI 2135 putter line to make more putts.

eBay
$124.99
See it
Last Amazon price update was: September 13, 2021 3:16 pm
× Product prices and availability are accurate as of the date/time indicated and are subject to change. Any price and availability information displayed on Amazon.com (Amazon.in, Amazon.co.uk, Amazon.de, etc) at the time of purchase will apply to the purchase of this product.